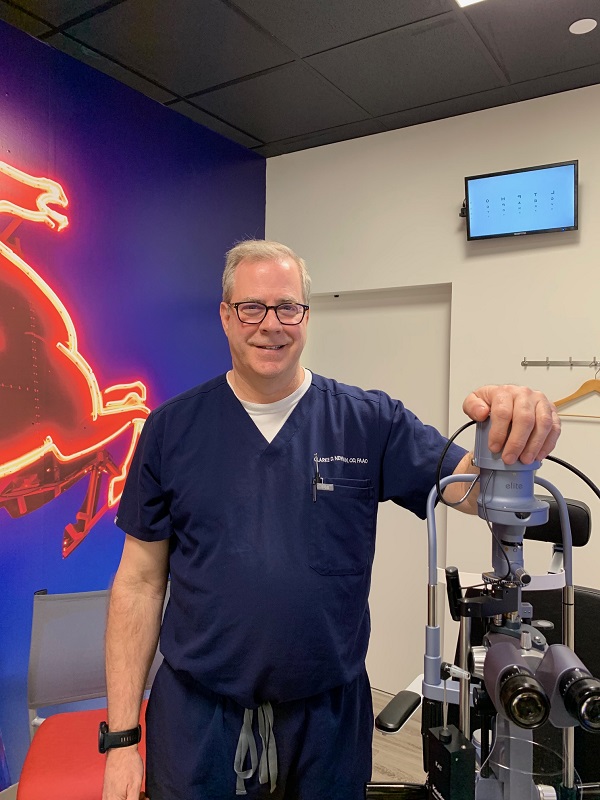 Dr. Clarke Newman grew up in Dallas, Texas. After graduating from Hillcrest High School in 1978, he attended the University of Houston. Dr. Newman graduated in 1982 with a Bachelor of Science Degree in Pre-Medical Biology. His minor was in evolutionary biology.

Then Dr. Newman attended the University of Houston College of Optometry (UHCO). In 1985, He completed his Optometric Externship at the Walter Reed Army Medical Center in Washington, DC and completed the Ocular Surgical Anatomy Course at the Bethesda Naval Hospital. Also, in 1985, while a fourth-year optometry student, Dr. Newman worked with William Lipsky, MD to develop new visual flight regulations for the space shuttle program by prescribing the first contact lenses to go into outer space. Dr. Newman received his Doctor of Optometry Degree in 1986.

During his education, Dr. Newman received several awards. He received the UHCO Faculty Awards in Contact Lenses and Ocular Pathology in 1986. He was also the UHCO recipient of the Barnes Hind Ave Custos Oculi Award for “Outstanding Achievement for Contact Lens Studies.”

In 2007, the Review of Optometry named Dr. Newman one of the “Private Practice Leaders” in their list of “Contact Lens Pioneers.”

Dr. Newman is an Adjunct Assistant Professor at the UHCO. Plaza Vision Center is a teaching practice.

Dr. Newman is the editor of Texas Optometry, and is a winner of the Best Editorial Award from the Optometric Editors’ Association. He writes frequently, and has a regular column in Contact Lens Spectrum.

Dr. Newman was one of the first Doctors of Optometry to become Board Certified by the American Board of Optometry.

Dr. Newman also served from 2012—2019 on the Board of Directors of the Center for Vision Loss of the American Foundation for the Blind.

Dr. Newman lectures on a wide range of topics in eye care to other optometrists, particularly in the areas of contact lens practice and ocular disease. He has also done clinical trials for the ophthalmic industry and has served on several ophthalmic industry advisory panels. He also serves on the Advisory Panel of the Gas Permeable Lens Institute (GPLI). Dr. Newman has authored many articles and a book chapter.

He serves on numerous committees at the American Optometric Association (AOA), of which he has been a member for thirty-four years. Dr. Newman Chaired the Federal Relations Committee for the AOA, the committee responsible for all federal legislative and regulatory activity for optometry. He currently service on the Evidence Based Optometry Committee which develops best practice guidelines for each eye disease based on the best peer reviewed research.

Dr. Newman has served in the leadership structure of the Southwest Council of Optometry, and is currently the immediate Past Chair of the American Academy of Optometry’s Section on Cornea, Contact Lenses, and Refractive Technologies, having completed his term as Chair from 2016—2018.

Accessibility by WAH
Call Us Text Us